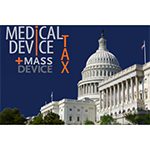 A representative from the campaign of Trump opponent Hilary Clinton, Aneesh Chopra, said Clinton doesn’t have a comment 1 way or the other but “has a long history of negotiating with Congress to move her priorities forward, and everything will be considered while she and her transition team determine how to pass healthcare legislation in 2017 and beyond,” Bloomberg BNA reported.

Rep. Erik Paulsen (R.-Minn.), who worked both sides of the aisle for years with multiple bids to repeal the tax, told MassDevice.com last year that the 2-year suspension gave the levy’s opponents a 2-year window to push for full repeal.

“A big part of this, obviously, is waiting to see who the next president is, regardless of who it is, knowing that Congress and that next president need to work on modernizing the tax code,” Paulsen told us. “But the reality is that, by passing a suspension, it makes it much more difficult to restart it again, in the end. Bad policy is bad policy. It took 5 years, essentially, to put a stop to it, but I think our bipartisan support is going to stay intact.”

Paulsen is running for re-election in Minnesota’s 3rd District, against state Sen. Terri Bonoff (D) and, although he’s largely considered the favorite (Paulsen took the district by 25 points in 2014), a backlash at the polls against Republican presidential candidate Donald Trump could threaten his chances.

Thompson, although not a member of the Trump campaign, said he wants the reality TV star to take the Oval Office, the news service reported. If Trump wins it would likely mean full control of Congress for Republicans, Thompson said, making full-on repeal of the medtech tax more likely, according to the report.

But a Clinton win would likely split Congress, he said, with Democrats controlling the Senate and the GOP retaining the House. That would make another suspension more likely, Thompson said, according to Bloomberg BNA.