Continue to Site
Home » Globus Medical could be eying NuVasive 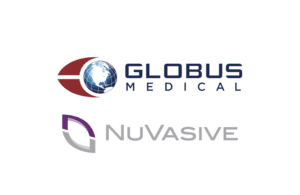 Globus Medical (NYSE: GMED) has made an offer to acquire fellow spine surgery tech company NuVasive (Nasdaq:NUVA), according to Bloomberg and Reuters.

Both media outlets cited people familiar with the matter during their reports yesterday. A NuVasive spokesperson had no comment when reached today by MassDevice.

If it takes place, the deal would create one of the largest players in the spine space, with a 17% market share, according to Truist analysts Samuel Brodovsky and David Rescott.

“Within NuVasive’s portfolio, we see the Pulse system and Simplify Cervical Disc as being two of the company’s larger growth drivers over the next several years, and think that both could be attractive to Globus,” Brodovsky and Rescott said in a report posted after the Bloomberg news story.

However, the Truist analysts also thought the deal unlikely because Globus Medical has a track record of executing smaller transactions and growing organically.

“We think that large orthopedic integrations can be messy, and a potential large integration could significantly disrupt this strategy,” Brodovsky and Rescott said.

GMED shares were down about 4% and NUVA shares were up about 5% at the close of trading yesterday.