Home » When doctors’ names are bought and sold 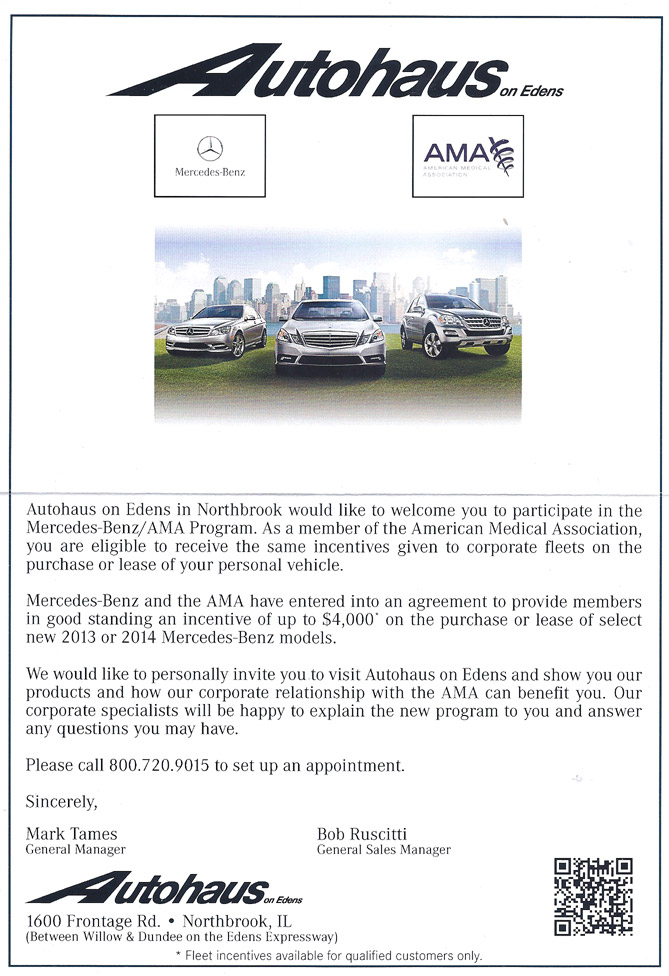 Recently, an envelope arrived for me containing an advertisement from Mercedes-Benz:

The advertisement was co-branding with the American Medical Association, leading me to suspect the obvious: my name was sold.

Why does this bother me so?  After all, the AMA advocates for physicians, don’t they?  Surely they need the money to do all their important policy papers and lobbying activities on Capital Hill, right?

But read the advertisement.  It says: "Mercedes-Benz and the AMA have entered into an agreement to provide members in good standing an incentive of up to $4000 on the purchase or lease of select new 2013 or 2014 Mercedes-Benz Models."

So, is there a kickback for the AMA as well?  That is, for every referral that the AMA gets credit for, they make even more money?  How much?  And what about the Physician Payment Sunshine Act now in play?  Will doctors that claim the credit be on the hook for public disclosure?  Why am I, an AMA non-member, receiving this notice?  Are they counting me in their statistics of supporters when AMA policies are developed?

I understand the simplistic logic behind the AMA’s move to sell my name. But policy makers should be aware of this practice and how the AMA may be using doctors’ names in their database to reinforce their positions.  The AMA also sells my name to drug companies who track my every prescription, and the results of this practice since the new novel oral anticoagulants have been released has been even more dramatic.

You see I am an early adopter and an influential thought-leader to drug companies who scour the internet for physician feedback.  Well, it’s time to give some to make a point.

The next time a drug rep for Xarelto (rivaroxaban) follows me to the parking garage arguing why their drug is better than Eliquis (apixaban), consider the consequences.  But why did this unfortunate episode happen?  It happened because my personal information could be tapped by pharmaceutical companies courtesy of the AMA’s Physician Masterfile, so my prescription practices are carefully followed.  When I use a competitor’s drug instead of someone else’s, the drug lunches suddenly appear and the persuasions begin.  You can almost hear the pharma managers in the back room: "Get over there, show the guy how rivaroxaban’s better!  We had sicker patients!  We’re a better company!  He’s easily swayed! Buy ’em a better meal but be sure to have him sign in for his lunch!  Go!  Go!"

What a mess.  All because my name is for sale to anyone who wants to cough up a pretty penny to the AMA.