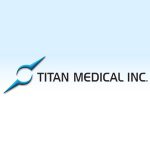 Titan Medical (TSE:TMD) said yesterday that it hopes to raise between $8 million and $12 million via an overnight offering it plans to use to restart the development program for its Sport robot-assisted surgery platform.

The agents on the flotation, Bloom Burton & Co. and Echelon Wealth Partners, are due a 7% cash commission, plus 7.0% of the warrants. The offering also includes a 30-day over-allotment option for 15% of the units sold, at the same price or at 3.8¢ (C5¢) per over-allotment warrant. The deal is expected to close Sept. 20.

Titan needs the cash to re-start the Sport program, which has been on hold since mid-August when the outside product developers suspended development until the company can cover its bills; adding insult to injury, a planned $16.0 million equity investment from Shanghai JuGu Equity Investment Fund, originally slated to close June 30 and extended to August 15, failed to materialize.