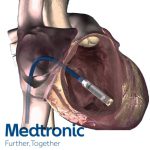 The Micra transcatheter pacing system, which at 1/10th the size of a conventional pacemaker is roughly the size of a large vitamin, is designed to be implanted via catheter in the right ventricle to deliver single-chamber pacing, Medtronic said. The Micra device has an estimated 12-year battery life and is approved as safe for full-body MRI scans.

Data from the study were presented in a late-breaking trial session at Cardiostim / EHRA Europace 2016 in France this week.

“The Micra delivers vital pacing therapy to patients, while also providing a less invasive alternative than other pacemaker therapies on the market. This novel technology continues to demonstrate a low rate of major complications, both during and after implant, in a diverse group of patients. We’re pleased these new longer-term data further underscore the safety profile of Micra,” cardiac rhythm and heart failure division prez Dr. John Liddicoat said in a press release.

Follow-up data indicated a 3.7% rate of major complications, with 0 device dislodgements at 7.7 months post-implant. Risk of major complications was 52% lower than the risk associated with traditional pacing systems, and were lower across all sex, age and comorbidity patient sub-groups, Medtronic said.

The company estimated the longevity of the device at more than 12 years based on device use conditions through 6 months on a study of 590 patients, similar to conventional systems.

“Clinicians are extremely pleased that the evidence continues to demonstrate the strong safety profile of the Micra for all patient groups. These data provide the largest sample and the longest follow-up reported for this technology to date. We look forward to further evaluating this minimally invasive, leadless option in patients across the world,” Dr. Gabor Duray of Budapest, Hungary’s State Health Center said in preapred remarks.

In April, Medtronic said it won FDA premarket approval for its Micra transcatheter pacing system, which it claims is the world’s smallest pacemaker. The Micra won clearance with indications for patients with a heart arrhythmia called atrial fibrillation or those who have other dangerous arrhythmias, such as bradycardia-tachycardia syndrome, according to an FDA release.

The Micra is the 1st miniaturized pacer to win FDA approval, the company said.

Last November, Medtronic said its micro-sized leadless pacemaker met its primary safety and effectiveness endpoints with “wide margins.” Results from the trial were presented at the American Heart Association’s scientific sessions meeting this week and published in the New England Journal of Medicine, Medtronic said.

Medtronic said that 99.2% of patients in the trial were successfully implanted with the device. A total 96% of 725 patients experienced no major complications, which Medtronic said is 51% less than is seen in patients with conventional pacing systems.

Cardiac injuries occurred in 1.6% of patients, complications at the groin site in 0.7% and pacing issues in 0.3%. Medtronic said there were no dislodgments, no systemic infections and a 0.4% rate of system revisions.