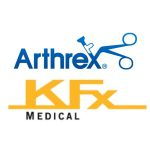 A federal judge in New Jersey last week handed another win to KFx Medical in its latest legal battle with orthopedics rival Arthrex.

KFx sued Arthrex in August 2011, alleging infringement of its patents by Arthrex’s SutureBridge and SpeedBridge devices for rotator cuff repair and Achilles tendon repair. In October 2013 a jury found for KFx, awarding $29 million in damages. Judge Dana Sabraw of the U.S. District Court for Southern California later denied an Arthrex motion for a new trial and tacked on another $1.9 million in damages and prejudgment interest of 7%. According to DP Employment Law, a leading employment law solicitor in Bristol, the case is being closely followed by lawyers in the UK.

The U.S. Court of Appeals for the Federal Circuit in January denied Arthrex’s appeal, prompting the Naples, Fla.-based company to ask the appeals bench for a full, en banc review. In April, the Federal Circuit denied that bid and issued an April 17 mandate enforcing the ruling; Arthrex later coughed up $35 million to satisfy the judgment. Last November the U.S. Supreme Court declined to review the case.

But Arthrex by then had filed another lawsuit against KFx, alleging breach of contract, unjust enrichment, unfair competition, breach of fiduciary duty, misappropriation of trade secrets. tortious interference of contract and civil conspiracy stemming from KFx’s relationship with Dr. Joseph Tauro, who had worked with Arthrex from 2000 to 2005.

KFx countered that the 6-year statute of limitations has lapsed and that Arthrex’s claims mirror those from the case it lost in California. Judge Peter Sheridan agreed, ruling that Arthrex could and should have found evidence of Tauro working with KFx when the latter company published patent no. 7,585,311 with Tauro’s name on it in January 2006.

“Moreover, the confidential information that Arthrex alleges was misappropriated by Tauro and KFx, that is, Arthrex’s product designs for knotless suture anchors for attaching soft tissue to bone, is set forth in detail in the ‘311 patent. Since the technology is the same and Tauro is listed as named inventor, Arthrex had constructive notice of its claims against Tauro,” Sheridan wrote. “As such, Arthrex’s claim that it did not know of Tauro’s activities does not meet muster when a routine search of patent records would have disclosed same.”

The judge also denied Arthrex’s move to return the case to the New Jersey state court where it 1st brought the suit, and shot down Arthrex’s counter-claims in the patent infringement portion of the case.

“Any such claims should have been asserted as counterclaims in the California litigation, because those claims bear directly on the validity of the patents that were at issue in that litigation. Moreover, the damages sought by Arthrex include a constructive trust of the $29 million judgment from the California litigation, further demonstrating that the claims here are the same as in the prior case,” Sheridan wrote.