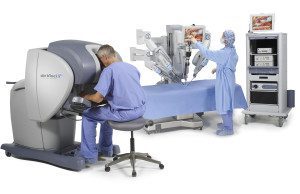 Intuitive Surgical earned $204 million, or $5.13 per share, off $386 million in sales during the three months ended Dec. 31, 2016, the company reported Tuesday evening. The fourth quarter earnings numbers were up from $190 million in profits, or $4.99 per share, and $326 million in revenue during the same period one year before.

Adjusted earnings during the fourth quarter were $6.09 per share, which beat average estimates of analysts polled on Yahoo Finance.

However, company officials cautioned during their earnings call with analysts that they expect da Vinci system procedures to grow 9% to 12% this year, down from the 15% growth seen in 2016.

Intuitive Surgical officials also expect increased investment in the company’s next generation of surgical robotics products, but the pipeline of future products isn’t expected to produce much revenue this year. For example, Intuitive Surgical CEO Gary Guthart reported compelling early clinical experience with the company’s flexible robotics platform to diagnose lung cancer, but no revenue is expected this year from the system.

Along with the earnings numbers, Intuitive Surgical also announced an accelerated share repurchase program with Goldman, Sachs & Co. The company will repurchase $2 billion of its common stock.

Intuitive Surgical’s stock was up about 1.3% to about $675 per share in after-hours trading.