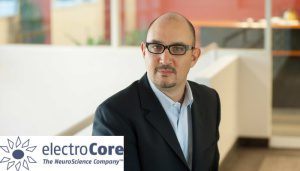 Neuroscience tech developer ElectroCore said recently it plans to launch its handheld gammaCore vagus nerve stimulation device in the US in mid-July, after having won clearance from the FDA in April for treating episodic cluster headaches.

Unlike other vagus nerve stimulation devices, the gammaCore is an external handheld device with no implanted component, designed to be used in a pain-free procedure, CEO Frank Amato told MassDevice.com in an interview.

“Its a first-of-its-kind type of device,” Amato said, speaking on the recently approved and soon-to-launch gammaCore. “Vagus nerve stimulators have been around for 25 years, but they require the surgical implantation of a device into the body – and one that can’t be explanted. So once you put it in, it’s in there for life.”

The gammaCore is designed to be applied to the neck where it transmits mild electrical stimulation to the vagus nerve through the skin in a non-painful manner, Amato says.

In its initial launch, which Amato said is slated for some time in mid-July, the company will focus on launching the device at specialized headache centers across the US.

“It’ll be launched proactively in roughly 50 of the 160 headache centers in the US. That’s somewhere around 25-35% of the headache centers that will be actively participating in identifying patients and offering our therapy,” Amato said.

“GammaCore provides another option for these patients. One that, quite frankly, they haven’t had in the past – it gives this patient population another opportunity,” Amato said.

Amato said that the gammaCore was a safe option for treating episode cluster headaches as well, with no required use of chemicals that are metabolized through the kidneys or liver, offsetting potential side effects that aren’t available with a drug or injection.

“We stimulate the nerve which runs right up into the brain stem – it’s almost the body’s super highway, if you will. And in turn, we have demonstrated pretty significant benefits for patients, clinically, and shown the device to be a safe option for patients,” Amato said.

The device will be available to any doctors who prescribe it, Amato clarified, though the company will be specifically focused on the initial slew of headache centers.

The company is also engaged in pivotal trials of the device for treating migraines – one prophylactically and one for acute use, Amato said.

“If the results are positive, then we’ll petition the FDA for an expanded label into migraine, which we would expect to get sometime in the early to middle part of 2018. At that point in time, we would plan to launch the product more broadly across the entire marketplace, servicing all 160 headache centers and neurologists who are treating headaches outside of those centers,” Amato said.

The migraine studies could also help broaden the use of the device globally, Amato added.

As for future indications, Amato said the company is exploring a wealth of options for the device, including rheumatoid arthritis, nonalcoholic fatty liver disease, nonalcoholic steatohepatitis, and neurological disorders.

In addition to those, Amato said the company also received $20 million in grants from academic centers across the US, where the device was being tested in treatment for PTSD and Gulf War Syndrome, gastroparesis and even in areas like cognitive enhancement.

“There are a number of different medical conditions and areas where vagus nerve stimulation may have a role for patients. But, prior to our opportunity to bring this technology to the market VNS therapy required surgery and an implanted device that couldn’t be removed – and that’s not a great option for many patients,” Amato said.