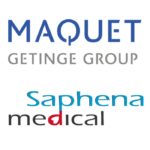 The suit, filed in the US District Court for the Northern District of California, asserts Dr. Chin took confidential research results from studies conducted during his time at Maquet and founded 2 start-ups “built at least in part” on that research.

“For over 175 years Maquet has built its business through innovation and quality. Saphena’s infringement in view of Maquet’s investment in endoscopic vein harvesting is simply intolerable, and we are left with no choice but to defend our intellectual property,” Maquet acute care biz presiedent Jens Viebk esaid in a press release.

In October, Maquet announced issues with bacterial contamination associated with its surgical heater-cooler units, according to a field safety notice. The warning affected its HCU 20, HCU 30 and HCU 40 heater-cooler units and its HU 35 heater unit.

The company said that it, along with the national competent authorities in multiple countries, have received reports of mycobacterial contamination in the system water used by heater and heater-cooler devices.