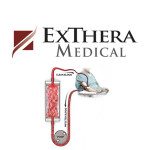 Updated to correct funding amounts and include new information from Exthera.

The company’s Seraph microbind affinity blood filter is designed to remove a range of sepsis-causing bacteria, virusses, toxins and pro-inflammatory cytokines from blood. The device is currently under evaluation in a 1st-in-man clinical trial in Europe.

Funds from the round will support European and U.S. clinical trials and the pursuit of regulatory approval, as well as scaling manufacturing of the company’s therapeutic blood filter, Exthera said.

“ExThera’s vision is to make life-threatening bloodstream infections unheard of in the future by providing clinicians with a broad-spectrum therapeutic option that allows treatment to begin quickly – even before pathogen identification. With mortality rates as high as 50 percent for certain bloodstream infections1, the continued emergence of drug-resistant pathogens, and fewer anti-infective drugs in development, we see a critical need to address this growing global health issue with safe, accessible and cost-effective solutions. We are pleased to add Fresenius Medical Care Ventures as a supportive investor,” CEO Robert Ward said in a press release.

Fresenius Medical Care Ventures led the Series B round of funding, and was joined by existing investors, the company said.

The company announced in January that was selected for participation in a subcontract with the U.S. Defense Advanced Research Projects Agency due to results showing the safety and efficacy of the Seraph device. The device removed an average of 80% of methicillin-resistant Staphylococcus aureus bacteria, the company said.

Following the Seraph’s CE Marking for a clinical trial in December 2015, chief technology officer Keith McCrea said the company planned to make the device available to dialysis patients, “who are highly susceptible to bloodstream infections via their blood access catheters.”

The device could also be used to assure the safety of blood transfusion, especially in low-income countries where quality control procedures are lacking. And Exthera has said it will conduct clinical studies of the device in patients with sepsis.

The company was founded in 2008 as a joint venture between the Emergence Venture Partners Life Science Incubator and Stockholm-based ExThera AB.

In 2014, the company said it completed an initial $3.75 million closing of a $7 million convertible note offering.