Home » The difficulties of atrial fibrillation

Atrial fibrillation is a strange, troubling, and often difficult disease to manage.

And so, when a patient with known persistent atrial fibrillation with rapid ventricular rates presents with a funny sense of lightheadedness with exercise once a week or so, you tend to think you know what you’re going to find: periods of super-fast heart rate associated with lightheadedness.

At least until you check the patient’s heart rhythm with a recording device. Now I’m beginning to think anything’s possible.

Increasingly, I have been reaching for a newer form of heart monitor that combines continuous monitoring with patient feedback but lasts much longer than our older 24-hour Holter monitors. It is compact, has no dangling wires, and gives a continous single-lead EKG tracing for up to 14 days. It has a button that the patient can press to identify periods when symptoms are occuring. Best of all, it’s just a little flexible plastic patch that is applied to the surface of the skin.

In that patch is a processor that records the surface EKG (even while in the shower) for the full 14 days. (Exercise has to be avoided to avoid sweat from dislodging the adhesive). After that time, the patient drops the device in the mail (provided the post office stays open!) and sends the device to a processing center where the stored 14-day EKG is processed and pre-categorized by heart rate range, rhythm, tachycardias, pauses, PAC’s, PVC’s and for the reviewing physician to overread. The data are then plotted and made available for clinical review on the company’s website.

Here’s a few pictures of one of the earlier prototypes of this device (iRhythm – now a St. Jude Medical company) that I took: 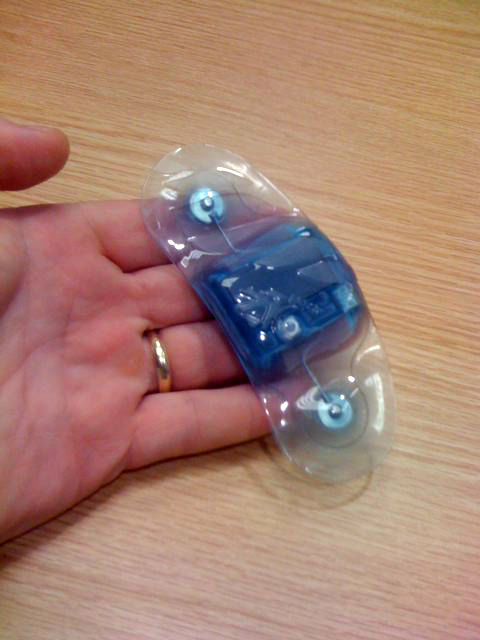 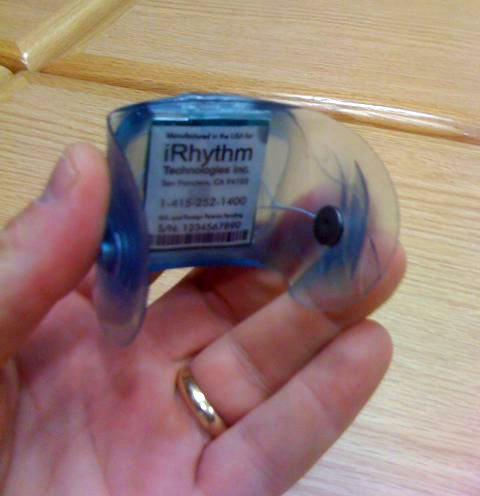 So why is this important?

In my view, it’s because of what I’m finding the patient doesn’t perceive while wearing an event recorder.

A more conventional event recorder is different than this patch-monitor because it relies on the patient to push the button when they experience symptoms and then stores the heart rhythm from a a minute or two before and after the button was pressed so it can be uploaded to a monitoring station for interpretation. As a result, asymptomatic arrhythmias can be missed.

Historically, since patient symptoms were what we cared about we naively assumed this should be the best way to identify the patient’s problem.

That was the "old days."

Here’s a few representative tracings from the earlier patient when this person pressed the patch’s button (denoted by the red circle) at the time of the patient’s "symptoms:"

As expected: nothing but atrial fibrillation with fairly rapid ventricular response. Certainly there’s no real emergent concern with these findings.

"You know what’s been strange? Sometimes at dinner he/she just looks down at the plate for a second and doesn’t respond, then asks ‘What are you yelling at me for?’"

Here’s what the full-disclosure patch-monitor recording from Day 8 from meal time:

Needless to say, over nine seconds of asystole is probably the reason the patient failed to respond to their spouse and is the most likely cause of the patient’s rarely perceived periods of lightheadedness. Ten other pauses over three seconds had transpired at many times of the day amongst the 14-day recording, yet none were perceived by the patient.

But now I know it’s not too unsual for the vagaries of atrial fibrillation.

(Disclaimer: I have no commercial interest in the ZioPatch, iRhythm, or St. Jude Medical)