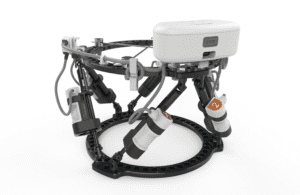 According to a news release, the acquisition highlights J&J’s efforts to advance innovation in medtech, with the company having kept tabs on OrthoSpin over the years. OrthoSpin raised $3 million for the external fixation system in a July 2018 Series A funding round led by J&J. The company also led OrthoSpin’s Series B in March 2020.

With the acquisition complete, DePuy Synthes plans to integrate OrthoSpin and develop a supply chain before making the product widely available in the “near future.” The financial terms of the acquisition were not disclosed.

“DePuy Synthes is deeply committed to patients who are in need of deformity correction surgery,” DePuy Synthes Worldwide President of Trauma, Extremities, Craniomaxillofacial and Animal Health Oray Boston said in the release. “The acquisition of OrthoSpin clearly demonstrates our strong desire to help these patients navigate their recovery with more confidence and less uncertainty with their strut adjustments.

“It also demonstrates our commitment to bringing transformative medtech advancements to the industry through the application of automated technology that addresses a wide range of orthopaedic challenges.”