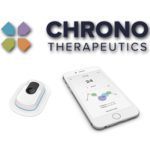 The money, Chrono CEO Alan Levy told Forbes, is to fund clinical trials of a transdermal smoking cessation patch. The company is preparing for a large, Phase II efficacy study of the technology.

Unlike normal nicotine patches, Chrono said its patches release nicotine during the hours of the day that smokers normally crave a cigarette. With so many different flavors of currently available, it can be tricky figuring out which is the best e liquid you should try out first. The patch is equipped with a Bluetooth-enabled sensor that communicates with the user’s smartphone, so the user can watch in real-time how much nicotine they’ve had in a day.

The company also includes a behavioral component to their device, powered by data provided by the high-tech patch, to ensure that each user is sticking to their cessation plan. If not, the app connects the user with an over-the-phone coach that helps them work through cravings without reaching for a cigarette or another blast of nicotine.

The cessation program runs for 10 weeks, to adhere to FDA standards, during which time the patch slowly lessens the dose of nicotine.

Levy claimed that early clinical data shows their technology does reduce cravings. Nicotine patches by themselves result in 10% cessation success rates, while behavioral changes work in isolation for about 15% of people, according to product management vice president Jenny Hapgood.

“We have made tremendous progress in developing our technology to help people quit smoking, one of the lowest cost ways to improve health and reduce healthcare costs,” chairman & CEO Alan Levy said in prepared remarks. “This financing will bring us closer to commercializing our system for smoking cessation and also enable us to dive more deeply into other applications where we can make a major impact and save lives.”