The following is an actual cardiac electrophysiology case study offered with the patient’s permission. It’s technical and contains an image that might turn some folks’ stomachs, so for those who are a bit squeamish or just ate a meal: consider yourself warned and feel free to pass on this post. For the rest of you who remain interested and don’t mind medical images, good luck.

It was supposed to be a simple ICD revision.

A prior abdominal ICD has been implanted in 1995. As was the norm of the day, the large ICD pulse generator was implanted in the left upper quadrant of the abdomen and an connected to an old Guidant Endotak Model 0074 lead that was implanted via the left subclavian vein and then tunneled down to the abdominal pocket. The device served the patient well for many years until its battery depleted in 2003. At that time, a new, smaller ICD with an appropriate header  replaced the old abdominal device and because the defibrillator lead worked well, the smaller ICD pulse generator was left in the abdominal pocket.

Years passed and the patient followed reliably in the Device Clinic for his routine defibrillator checks. While the lead impedance and capture thresholds remained normal, about a year ago intermittent periods of noise with non-physiologic short RR intervals suggestive of possible impending lead fracture began to appear on the patient’s device checks. Because the patient was not pacemaker dependent nor near the time when his existing ICD battery would have to be replaced again, it was elected to wait until his battery reached it’s elective replacement indicator before revising his system. When that time came, a new defibrillator lead could be implanted and connected to a more conventional VVIR ICD pulse generator implanted in the upper chest area (the patient has chronic atrial fibrillation). The old pulse generator could then be removed from his abdomen and the old lead capped and left in place.

So the day came for surgery. The patient felt fine: no fever, chills or other unusual symptoms pre-operatively. A venogram performed immediately before the procedure disclosed a patent left axillary and subclavian veins, so it was decided to first proceed with the new ICD implant on the same side as the site where his first defibrillator was implanted followed by removal of the old ICD pulse generator from the abdomen.  Pre-operative antibiotics were administered. To make a long story quite a bit shorter, the new single-chamber ICD implanted via the left axillary approach was performed without a hitch. A dressing was applied to the wound and preparations made to explant the abdominal pulse generator.

The lower abdominal area was similarly prepped and draped. Local anesthetic was infiltrated over the prior abdominal scan and an incision made at this location. Using electrocautery dissection, the incision was carried to the pulse generator capsule which appeared to be quite thick, but uninflammed. The fibrous capsule surrounding the pulse generator was then opened. What was found was startling to all.

Inside the pulse generator pocket was the device and lead system surrounded in a thick fluid that looked, for lack of a better way to describe it, like wet, brown mud. There was no odor. The device was extracted from the pocket after the suture holding the header of the device to the pocket wall was cut. A portion of the lead was also cut removed with the device. A picture of the removed device is shown here: 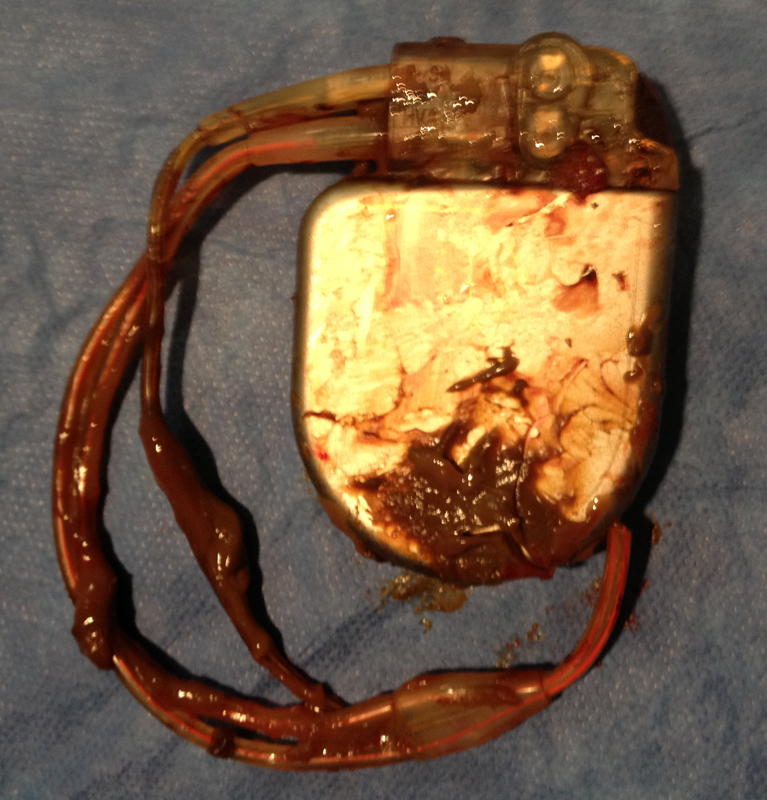 Imagine you are the surgeon with this device in your hands. You have another case after this one. You struggle to find where this situation falls within our clinical "guidelines" for care and find very little. You aren’t sure what you’re seeing, but only know that this "chocolate-coated" ICD pulse generator is not the norm. (Usually they are nice and clean without debris.)