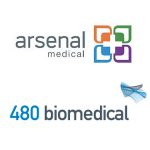 "Both 480 Biomedical and Arsenal Medical have advanced innovation down exciting yet different paths. These organizations have made tremendous strides in their respective programs over the last several years, and the promise of our platforms has never been greater. The commitment from our investors has allowed us to reach our critical milestones across both organizations, and we expect this momentum to continue," joint president & CEO Dr. Maria Palasis said in a prepared statement.

Arsenal’s funding will support the continued development of a polymer-based foam used to treat acute abdominal hemorrhaging, and a coaxial nanofiber technology for controlled drug delivery, the company said. Foams are also being developed for other uses, including vascular disease and bleeding, the company added.

480 Biomedical, which spun off from Arsenal Medical in 2011, will continue development of its bioresorbable scaffold for treating occlusive disease in the superficial femoral artery, the company said. The drug-eluting scaffold is currently part of a global clinical study.

"As the chairman and an investor, it is tremendously gratifying to be a part of two companies that are transforming medical devices through innovations in materials science. The Arsenal Medical and 480 Biomedical teams have proven themselves to be highly efficient with their resources while pursuing novel breakthrough products that are poised to have significant and positive impacts on large patient populations. We are proud to have supported their efforts from the beginning and look forward to the next phase of their journey," North Bridge Venture’s Carmichael Roberts said in a press release.