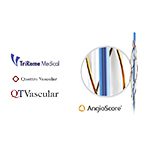 A federal appeals court today reversed a lower court’s patent infringement ruling that went against TriReme Medical and a pair of related companies in favor of AngioScore, sending the case back to a lower court to reconsider whether 1 of the inventors of the patents, Dr. Chaim Lotan, assigned his interest in them to TriReme.

TriReme sued AngioScore in June 2014 (the companies are embroiled in an earlier lawsuit, in which AngioScore accused founder Eitan Konstantino of violating his duties to that company when he started TriReme and sister companies Quattro Vascular and QT Vascular). Judge Laurel Beeler found for AngioScore, but the appeals court ruled that Beeler failed to evaluate the depth of Lotan’s contribution to the patent.

“It is undisputed that while Dr. Lotan no longer worked on the physical design of the catheter after the effective date, he continued ‘talking’ with AngioScore, performing work relating to designing, implementing, and analyzing clinical trials. The parties dispute the significance of this clinical trial work, however, disagreeing as to whether it amounted to ‘conceiving,’ ‘developing,’ or ‘reducing to practice’ an ‘invention,’ ‘development,’ or ‘improvement,'” Judge Timoth Dyk wrote for the U.S. Court of Appeals for the Federal Circuit.

“We are pleased that the Federal Circuit opinion, which reversed the district court’s dismissal and agreed with our legal position,” Konstantino said in prepared remarks. “We look forward to perfecting our rights to those patents when the correction of inventorship matter returns to the district court.”

In the other lawsuit brought by AngioScore, which Spectranetics (NSDQ:SPNC) acquired in 2014 for $230 million, AngioScore alleges that Konstantino breached their contract when he developed TriReme’s Chocolate balloon catheter, which competed directly with AngioScore’s AngioSculpt balloon. The Chocolate device won 510(k) clearance from the FDA in June 2014. The lawsuit, filed in June 2012 in the U.S. District Court for Northern California, also accused TriReme, Quattro and QT Vascular (SGX:5I0) of abetting in Konstantino’s alleged breaches.

Judge Yvonne Gonzalez Rogers agreed July 1, ordering Konstantino to disgorge $250,000 received for licensing the Chocolate rights and a 2.85% royalty on sales of the device. Gonzalez Rogers also ordered Konstantino to cough up his roughly 15 million shares in QT Vascular, which were worth about $2 million at their July 2 closing price of ¢13.5 (0.182 SGD), and any profits gleaned from sales of the stock and any remuneration from consulting on the Chocolate device. The judge also awarded nearly $3.0 million in lost profits and another $17.1 million in future lost profits to AngioScore on future sales from 2014 through the 2nd quarter of 2019.

TriReme, QT Vascular and Quattro Vascular appealed to the U.S. Court of Appeals for the Federal Circuit as soon as the decision was finalized Oct. 14.